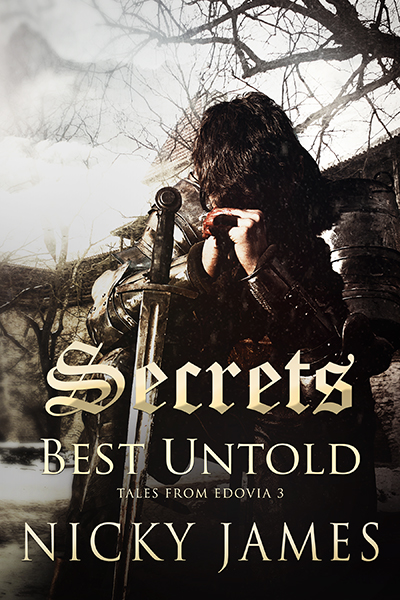 Aren’t there things in your past you’d like never to think on again? Things you wished could be erased from history, if only the history of your own mind?

Such is the case with Captain Brandon Leeson. In the two years since coming to Ludairium, he has fought to regain control of his life and buried his demons from his past so far down they should never resurface. Not only has he climbed the ranks in the King’s army, but he’s snagged the attention and love of the King himself. Having battled to earn the right to be together, Brandon has found what he considers his own personal happy ending. He couldn’t ask for anything more.

With the war threatening Edovia coming to a head, King Alistair Ellesmere works together with Brandon and his council to organize negotiations that will hopefully put an end to the ongoing threats. With Brandon heading up the party and Alistair safe in Ludairium, the men march north. It should have been simple. Brandon is a wizard with words and a master manipulator with the power to outthink and outsmart their enemy. But their cloak of deceit is unveiled and the consequence is a punishment no one could have expected.

What happens when the rules change? When the man you once were becomes the boy you left behind; the one who should have remained buried in the past. Will Alistair lose the one person who has kept him grounded over the last two years? Can true love survive a blow so deep it leaves only darkness behind? What happened to their happy ending?